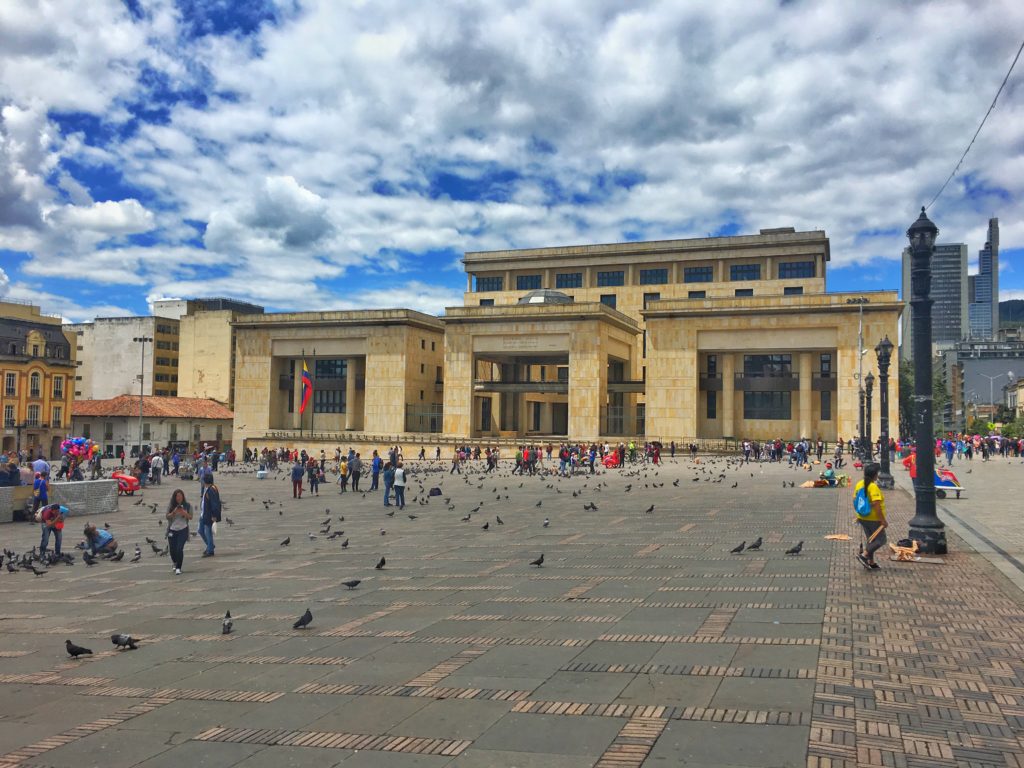 Warning:  This article is based on our takeaways from Bogota. Some of the points might not be true for other regions or even cities inside this region.

– For everyone that has the “Narcos” view of this country, please let it go;

– It is something that we cannot erase from the history of the country and even if we still feel some “discomfort” in people’s behaviour, the safety risks are as high as in any American or European city. If you are still worried about safety, allow us to tell you that Bogota’s downtown is very well guarded with constant military supervision on the streets, but during late hours, you should avoid being there. If you want to stay in the safest area possible, check Zona Rosa or Quinta Camacho. Basically, the more to the North you go, the safest it is; 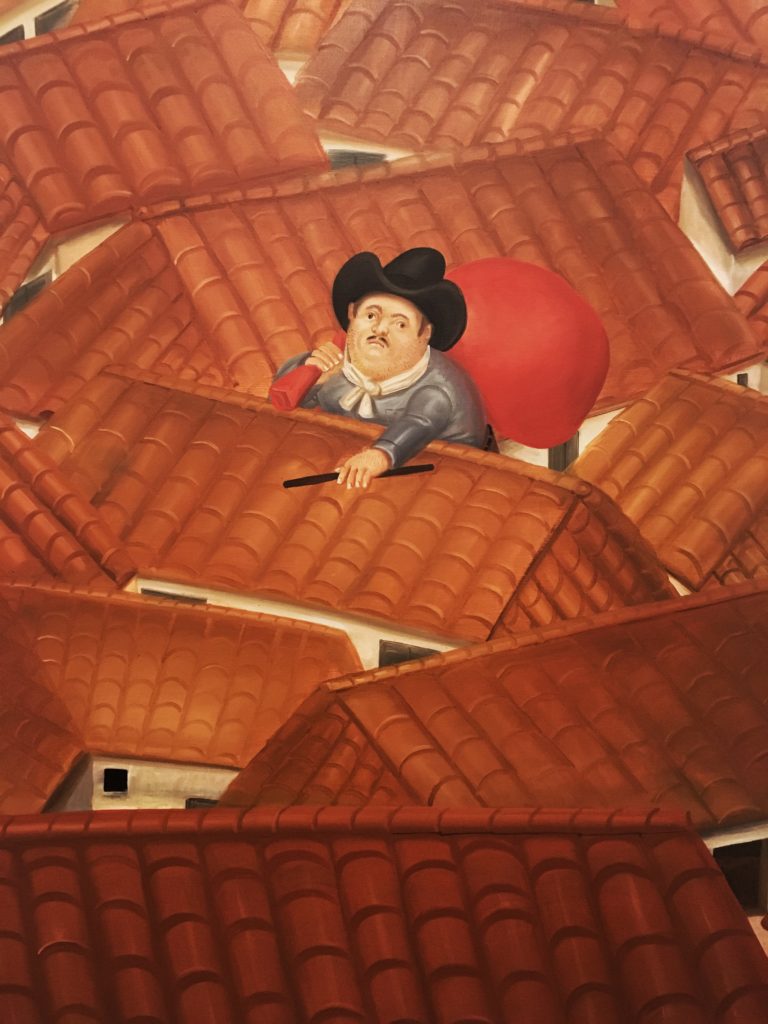 – 20-30 years ago the country was very dangerous due to drug cartels and uncontrolled situations – people disappeared and were killed. 18 years ago (early 2000) the situation was very bad. People used to walk the streets scared for their lives and probably that is why people are used to not trust others. However, now, walking on the streets seems to be safe – they are rather clean, there are police officers spread around and we did not see any “no go” areas.

– Many people sell things on the street – small quantities which can be easily moved, for example, just presenting their products on a carpet.
There are also many small street food trucks – with waffles, hot dogs, fruits and juice, coffee, etc; 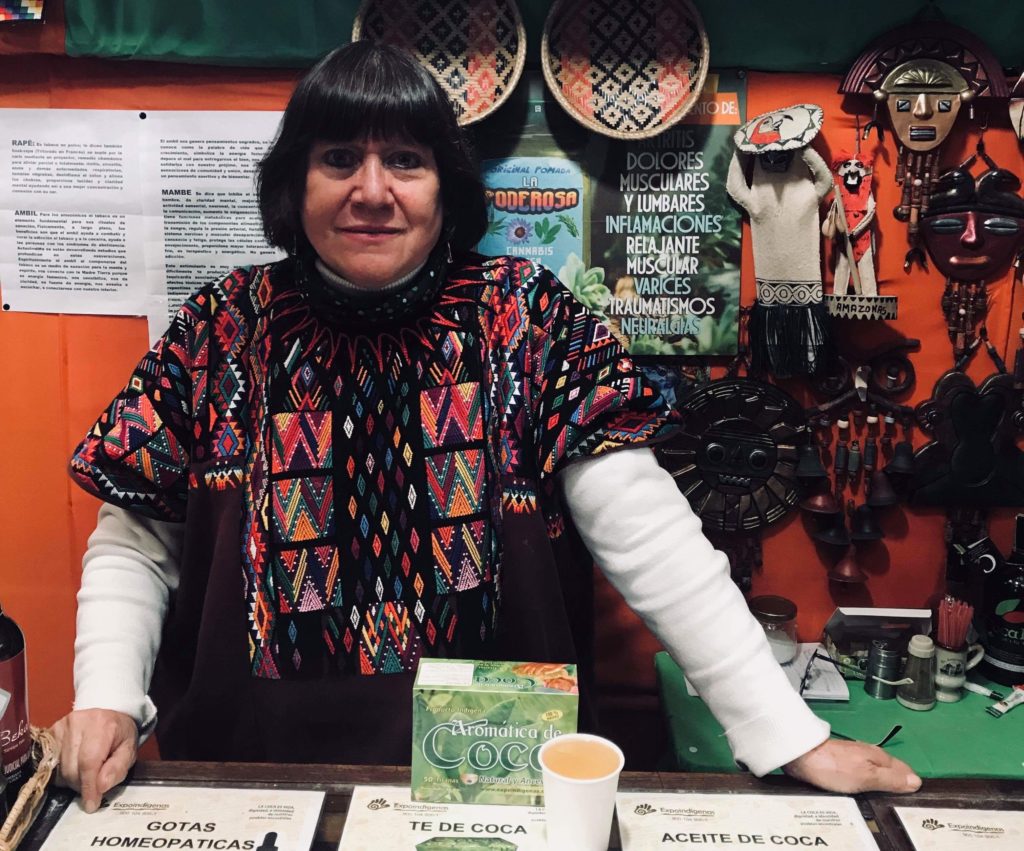 – There are people offering candies in exchange for a monetary donation;

– There is a big amount of bakeries everywhere, and places that are not bakeries sell empanadas and quick food to grab. 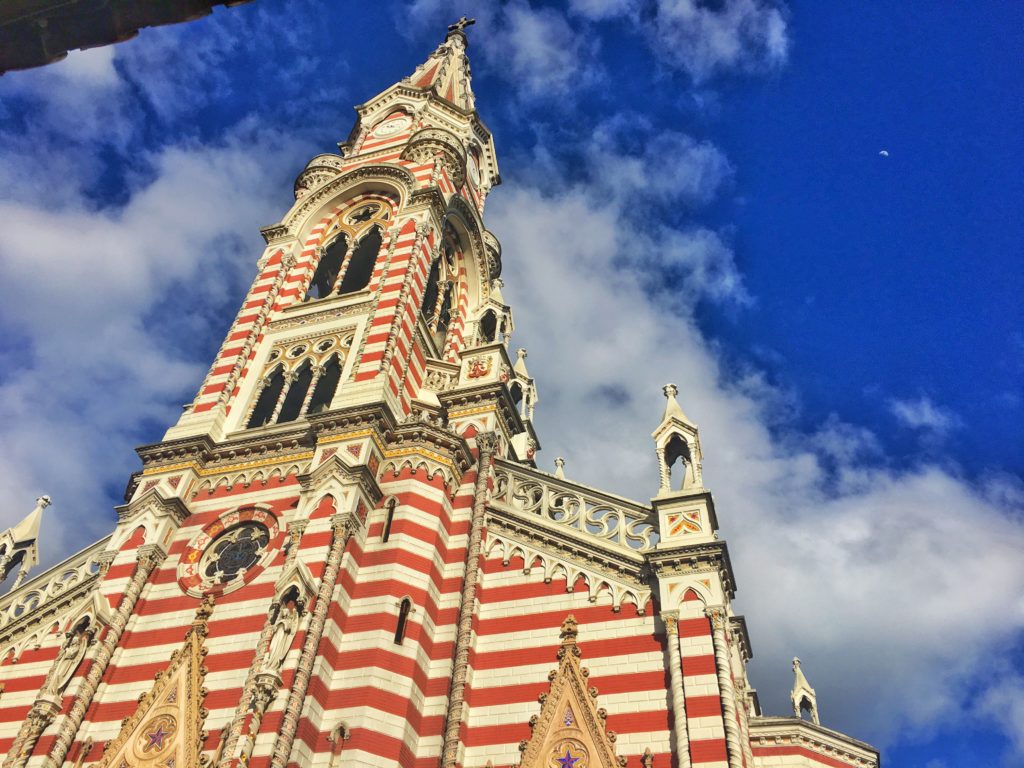 – The country is not very developed, but it is more advanced and safe that people who never been here used to think. Bogota is considered as a city of smart, educated people;

– In many streets you can buy books and see people playing chess;

– In Bogota, many people order food to be delivered and almost all the restaurants deliver (through Uber Eats, Domicilios.com, Rappi);

– During football matches people stand on their chairs and scream for the whole time; 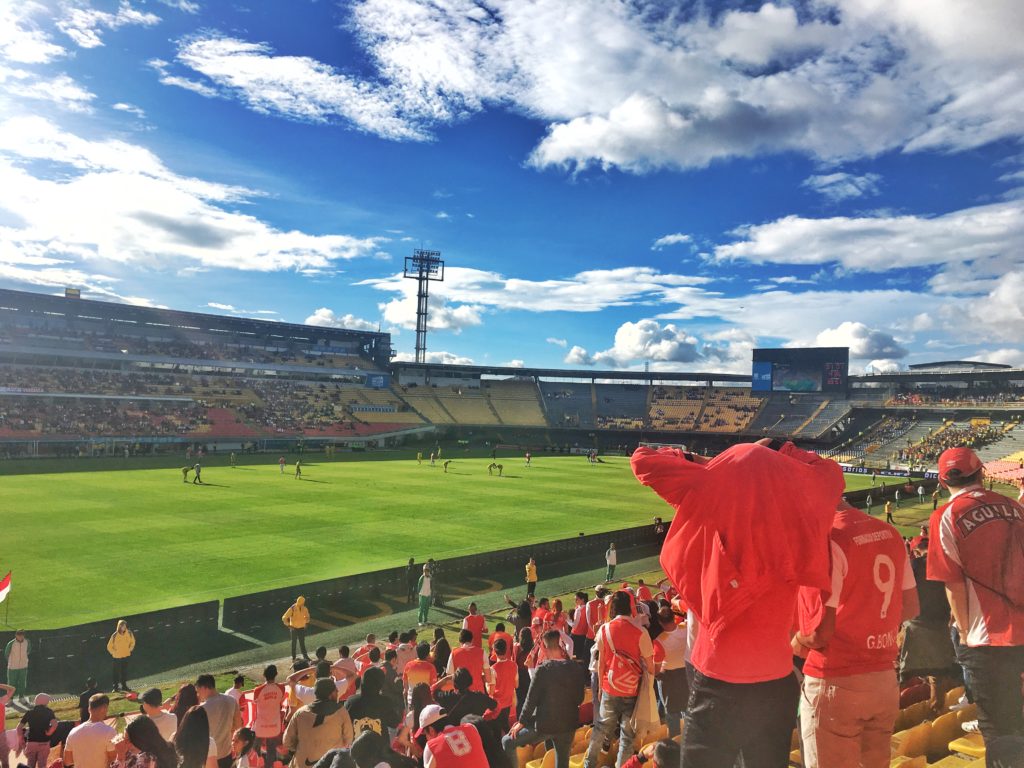 – Many people use bicycles – some streets are even closed on Sunday;

▫️ Mini-Stoves 🔥: In several places where you can buy arepas (check gastronomy section), in the stands they have small stoves where they finish up the arepa, by cooking it in the fire for some minutes!
▫️ Ponchos ❄️ : When you think about a country in Latin America, which close ties to the Caribbean region, you would never imagine how cold it gets in Bogota! We were surprised by that and found out that ponchos are a great and typical way to keep warm!

▫️ Average meals cost between 1$-4$. If you have a 4$ meal, it will already be something special. You can find many restaurants during lunchtime that serve sets with soup, main dish and drink for these prices and this is where a big number of Colombian workers go for lunch;
▫️ They also have the tip system in restaurants: propina. In some restaurants they already include it in the bill and give you to pay so you need to say that you do not want – with propina is considered the default option;
▫️ Huevos Rancheros – usually a breakfast dish, made of scrambled eggs with ham. Basic, but delicious and widely available in cafes or restaurants;
▫️ Arepa – round pieces of dough made of ground maize (corn) dough or cooked flour. They may be stuffed with cheese (even sweet version), chocolate or salty things;
▫️ Ajiaco – the most typical soup with corn and fat meat;
▫️ Lechona – stuffed roasted pig skin with the meat and rice. Incredibly fat and delicious.

▫️ Avena colombiana – cold drink made of oats, milk, sugar – very good, very sweet;
▫️ Arequipe – jelly with whipped cream;
▫️ Bandeja Paisa- mix of everything: rice, red beans, chorizo, arepa, avocado, chicharron (pork rind with fat crunchy part), grounded meat and plantain;
▫️ Empanadas – A delicious “pie” in the shape of a big dumpling, stuffed with rice and meat. It is common to have sauces outside of the restaurant to put in your empanada. On purpose or not, this turns out to be a nice marketing trick, as many people gather in the front of the shop while they eat the empanada; 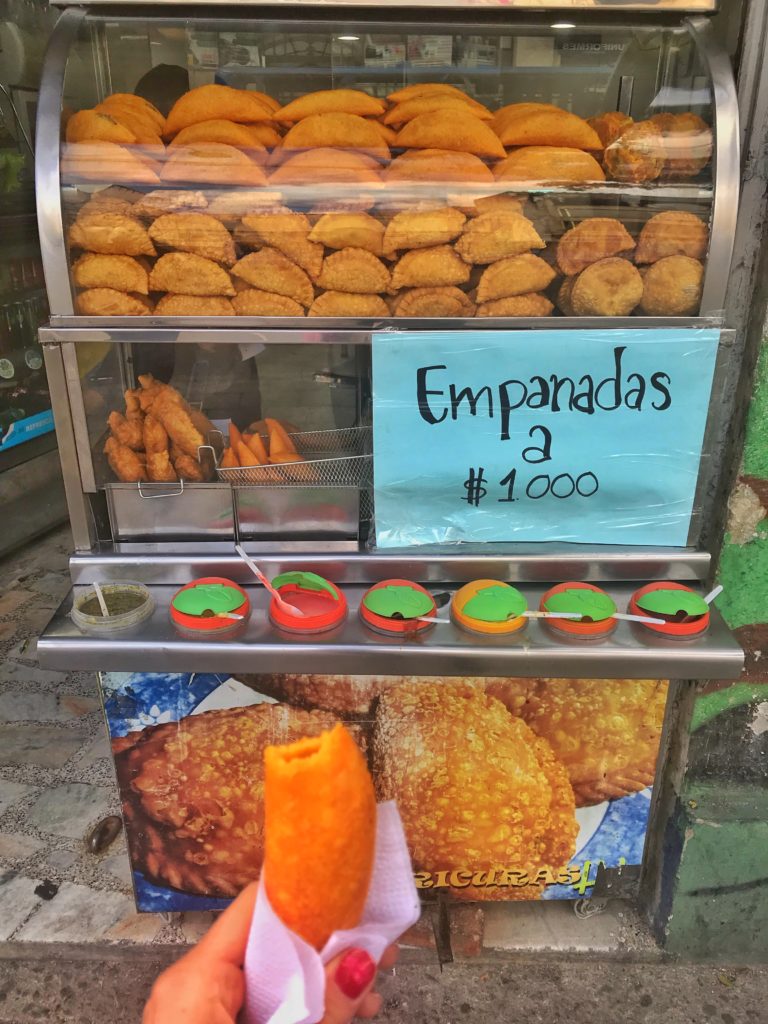 ▫️ Plantain (like banana but it is a vegetable);
▫️ More importantly, never forget about Menu Ejecutivo – between 5000 and 8500 pesos with soup, dish and drink!

▫️ We ended up staying only in Bogotá as it was the month we had more work as freelancers. We still managed to visit the touristic landmarks of the Colombian capital city and we climbed Monserrate at 5 am with two dear Colombian friends which turned out to be an amazing experience.

▫️ Travelling by plane inside the country is cheap and we were recommended to visit also Cartagena and Medellín;
▫️ Drinking water from the tap is a normal procedure. They have fresh sources nearby the city;
▫️The city of Bogota is huge. We used public transports and Grab, which are both cheap when compared to European prices; 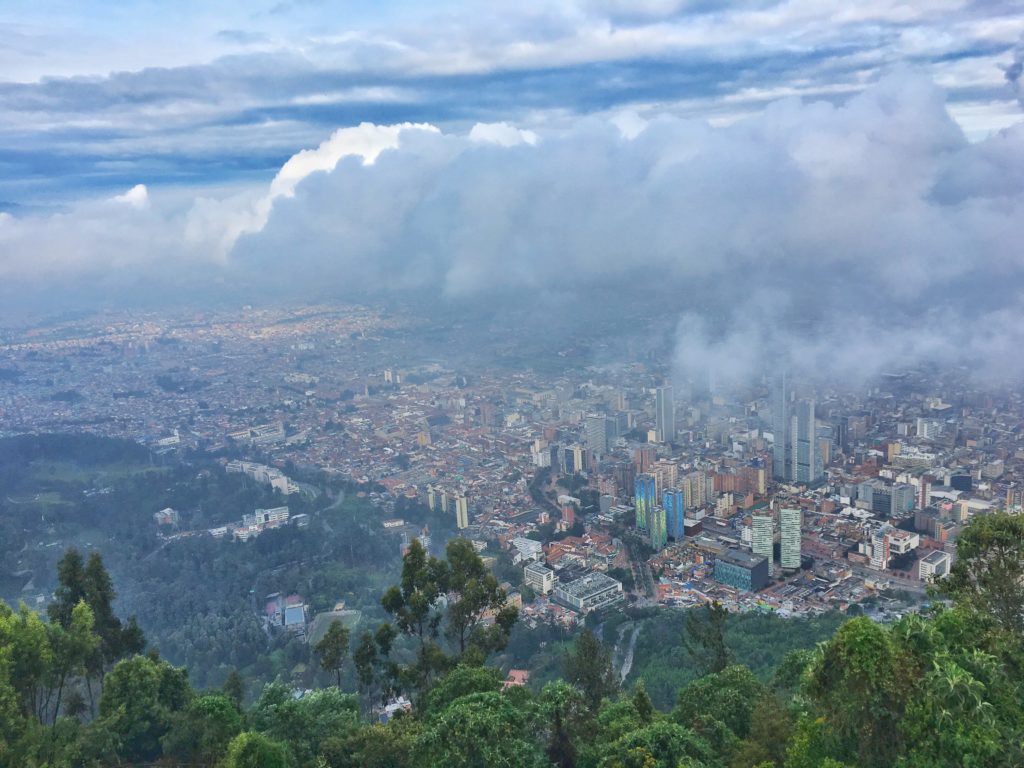