▫️ Society & Others: Before Korea we were in Japan and the differences in people’s straightforwardness are quite visible. At first sight we might mistake such characteristic with rudeness but it definitely is not the case. People are very nice and they try to help us at all times.
– It seems easy to enjoy your life without cash in Korea. Besides some street food place (not all), it is possible, and preferable, to pay with card everywhere.
– When we were in Boracay, we could “identify” Korean men from their hairstyle. It is unfair to say that the majority of Korean men – have the same haircut but it is true that we see many of them with longer hair on the top and shorter hair on the sides.
– Christianity is strong in Korea. Between Catholicism and Protestantism, they account for almost 28% of the population.

▫️ Metal Chopsticks: The first obvious difference between South Korea and other asian countries. Metal chopsticks are available everywhere, from restaurants to hostels…
▫️ Kimchi: This is so special that UNESCO considered the way of preparing kimchi as an Intangible Heritage of Mankind. Kimchi are salted or fermented vegetables, seasoned with ginger, chilli powder, salted seafood and many other things. It started as a way to conserve food during the winter months when it was difficult to get fresh vegetables but now it is a part of the country’s culture. 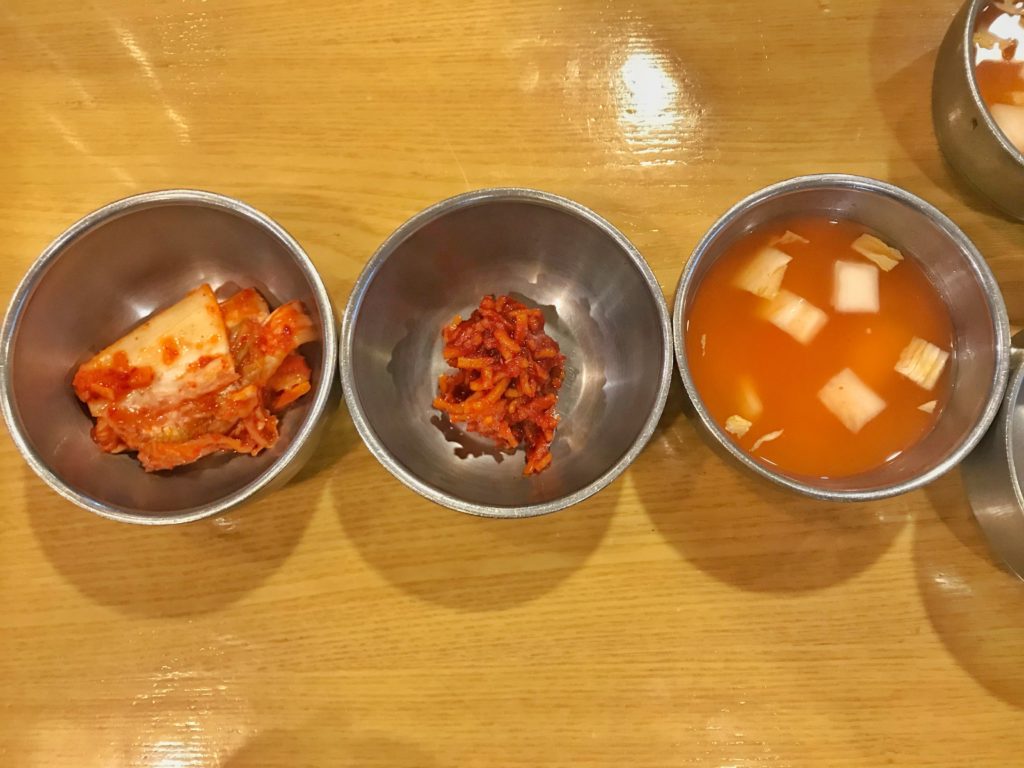 ▫️ Hallyu : South Korea is perhaps the only country in the world that publicly intends to become the number 1 exporter of pop cultural worldwide. Hallyu is a chinese expression that means “Korean Wave” and this is the best way to describe how South Korean as impacted Southeast Asia and also the Americas. A huge tsunami of music, movies, tv series, soap operas, fashion, video games and even cuisine.

▫️ Swimming Sandals: Everyone uses and not for swimming. It is common to see people on the street with such shoes (using socks beneath them, at least in the winter months). It is definitely due to practicality as it is common to take off our shoes before entering in the house. Does it look good? We will leave it to you to decide 😉
▫️ Hanbok: This is a traditional dress from South Korea. Although we don’t see many women (or none at all) wearing it, we see many shops selling it. It is mainly used in traditional parties or festivals.

▫️ Bibimbap – Literally called “mixed rice”, it is basically a base of plain rice with vegetables, meat, chilli paste, egg and many other things. It is served to you with all the ingredients separated and you are supposed to mix everything just before eating! REALLY DELICIOUS;
▫️ Gimbap – We used to call it the Korean “Onigiri”. It is more like a japanese maki but it is as widely available as onigiri in Japan. They also seem to eat it at anytime of the day, hence the comparison;
▫️ Bibim Naengmyeon – Spicy cold buckwheat noodles served in a icy soup are as a noodle dish. Very specific and amazing taste;
▫️ Waffles – Korean waffles are not as sweet as the Belgian ones. They are different in the way they are served as a sandwich, meaning, folded in half with cream, fruits, ice cream and many other things in between;
▫️Tteokbokki – spicy, sweet and chewy, what a connection! These stir-fried rice cakes are usually served also with fish cakes, covered with red delicious sauce (sometimes served like a soup);

▫️ Everything on a stick – whether you are in Daegu, Busan or Seoul, whether it is morning, afternoon or late night, you can buy some fish cakes, pieces of meat, sausage and mozzarella, or french fries corn-dog sticks (focus: hod dog in a cake base with pieces of french fries, deep-fried). Koreans seem to love this type of food – you can just stop by any street stand and have your got piece of choice (see picture);
▫️ Sundae – Korean blood sausage, made from the pig’s or cow’s intestine, stuffed with rice or glass noodles. Not as good as the Portuguese or Polish versions 😉;
▫️ Korean meals in restaurants always comes with different small dishes on the sides for free. If you like them you can ask for more. The water is also free. While you receive vegetables for free, fruits are very expensive – not as much as in Japan but definitely more expensive than in South-East Asian countries (for example 1-1.5$ for one apple);
▫️ Usually in bars you are expected to order some food too. Usually those places have higher prices than usual restaurants and they serve huge plates of food that can be shared with friends, such as a big tray of fried chicken pieces. It is normal for Koreans to share food in restaurants and then the bill is split equally among friends – independently on what you ate or drunk. 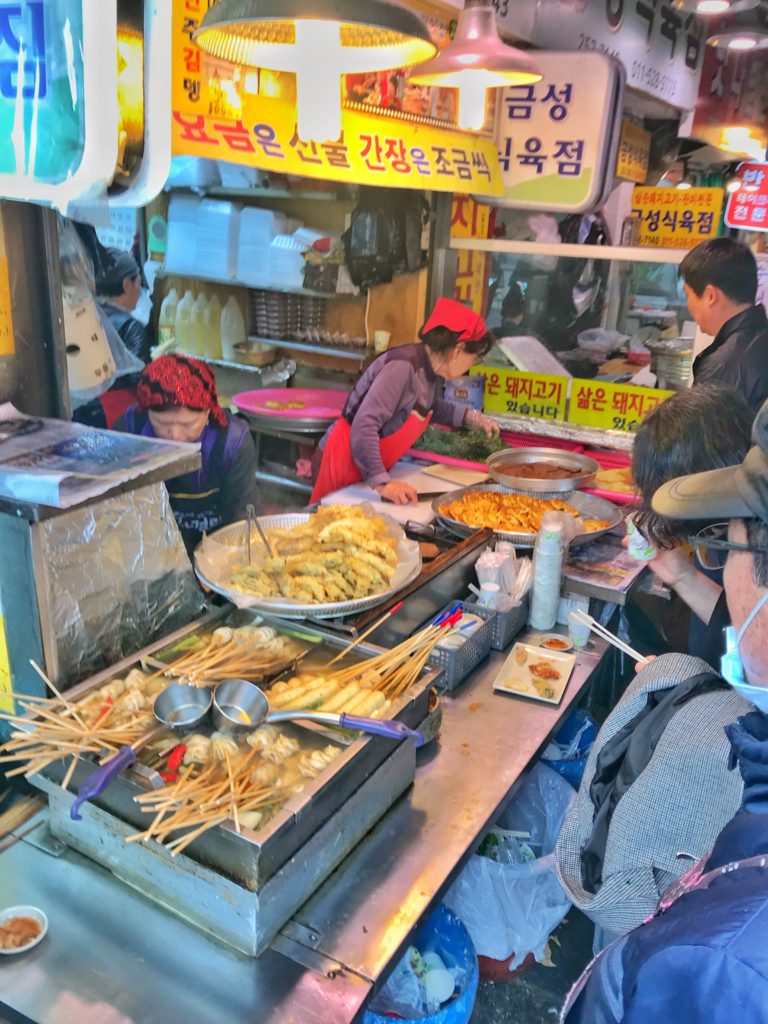 ▫️Daegu – The smallest city that we visited in Korea. We had here the best Bibimbap and visited the beautiful Duryu Park, full of cherry trees;
▫️Busan – Very big and modern city. It is famous for its seafood and the biggest seafood market in Korea. It was truly amazing to see so many species of seafood being sold, both alive and dead. Even small sharks we could have bought there 😉;
▫️Seoul – There is not much to say because at the time of this post, this is where we are. We will update this post soon !

▫️ Public transportation is very good. Sometimes buses and trains can be crowded, but you will find an easy way to reach your destination;
▫️ Definitely pay attention to the traffic in Seoul. Plan your trip with time;
▫️ Flights from Korea to Europe are the cheapest we have found among the East Asian countries.